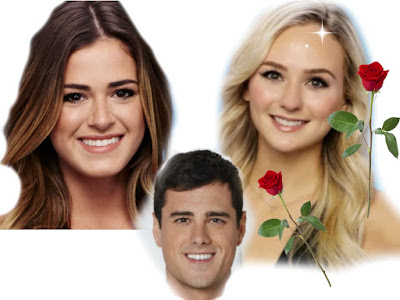 I am a huge Bachelor fan. I've been watching it since I was in high school. Who doesn't like the idea of falling in love? I know I do. This season's bachelor, Ben Higgins chose his bride to be Lauren Bushnell. Yasssss! Some people were team Jojo, but I knew that he would pick Lauren, especially after the women's hometowns. He literally teared up when asked what he likes about Lauren. Ben said he didn't know who he wanted to be with up to the very last minute. He said that he tried to be as honest as possible, which he did try, but you can never love two people, not the same at least. That's just a fact. So telling the women...."I don't know", "Nothing went wrong"....bla, bla, bla..was just bull in my opinion. Here are the real reasons why Ben chose Lauren and not Jojo:

Jojo's brother felt that Ben was a liar, and..... he was right.. kinda. Ben did not feel the same way Jojo did about him obviously. He was intimidated by her brothers and just never wanted to have to deal with them ever again. I get it. No one wants to marry someone that they've bumped heads with their family members from day one, especially over-protective brothers. The holidays just won't be as enjoyable as they should be.

Reason #2
Jojo is too hot for him.

Lauren is cute too. But keep in mind that Ben comes from a religious background, so to have a woman that shows off her God given boobies a lot.....he might not exactly want to settle down with her. Don't get me wrong, if I had her boobs I would show them off too....maybe a lil less. Anyways, most men see women that show their boobies a lot as sexual objects, and not too much wife material. Maybe that's why he kept Jojo around so long; he was in lust not love. Or because he wanted to prove her brothers wrong, but ended up proving them right. Whatever.

Jojo's ex-boyfriend wrote her a letter during the show stating that  he loves her and wants to be with her. And that he believes she is his soulmate...bla, bla, bla. Ben handled it well, but deep down inside it probably was still lingering in his brains. Also, Ben said that he had some bad history with girls and their ex-boyfriends still being in the picture. He stated, and I quote, "It never ends well". Well at least that's what I thought I heard.

Reason #4
This reason was contributed by a male, not my opinion at all.
Jojo might not age well.

The old saying goes... if you want to see what your wife will look like when she's older, take a good look at her mother. And while Jojo is gorgeous, Lauren might age better based on how their mothers look. I know right...ridiculous.  But apparently men do these things.

Bottom line, Ben  chose Lauren because he actually loved her, and Jojo had too many reasons against her. Lauren on the other hand was perfect, except for the lie that was told about her being different behind Ben's back. But that was a lie. He loved her from the very beginning(he said that also) and he knew it. No idea why he was keeping Jojo around to toy with, but that's kinda how this show works.  Lauren is "his person". Yayyyyyy! I wish them all the best. They are perfect together. Jojo is gorgeous and I believe she will find her prince charming as The Bachelorette. Can't wait to watch her journey.
Email Post