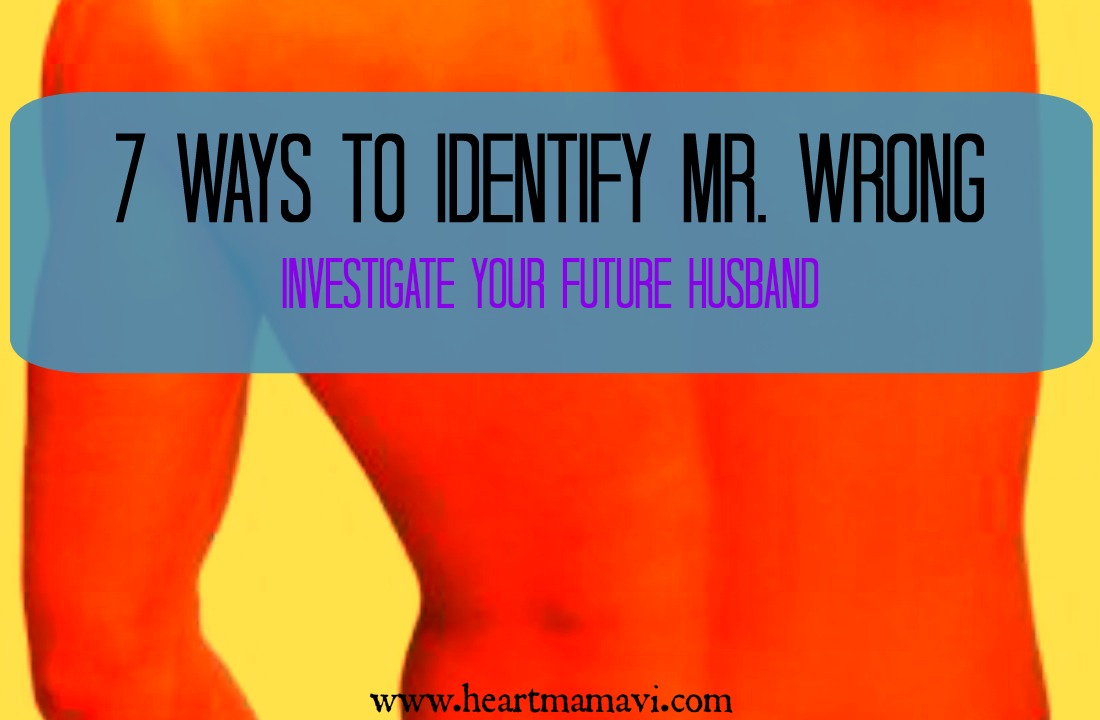 Finding Mr. Right is a struggle. But finding Mr. Wrong, not so much. Sometimes we can confuse the two. To help you clear this up once and for all, here are 7 ways to identify Mr. Wrong.

1. He talks badly about his family and friends all the time.

Investigation: Since he's busy talking about his family and friends, find out what they have to say about him. Wait, has he formally introduce you to any of his close relatives and friends? That's another problem in itself. But if he's always negative about  all the people that are suppose to be closest to him, he'll be negative about you. Make sure that you meet/talk to his family and friends, see what they're like. If he's serious about you, you'll meet them.

2. He talks badly about all his X-girlfriends, as if they were the problem.

Investigation: There's always two sides to a story. Don't take his word for it, talk to a few of his Xs, find out their struggles with him. Chances are, he might have the same struggles with you.

Investigation: Test him out during the dating stage. Find out what ticks him off and see how he reacts when you do it, multiple times. If he starts to curse, gets loud, appears violent/crazy, run to the hills. He is not the one. He should be calm, and still be able to maturely communicate with you, even when he's extremely upset. If he's acting like he has anger issues, red flag, he probably does!

4. His faith in God is questionable.

Investigation: If you want a true man of God that is, find out..does he have a church home, is he involved in church ministries, what does the pastor think about him, what does other church members think about him, does he own a bible, what kind of music does he listen to, what type of friends does he have(birds of a feather..), what are his hobbies, what type of places does he like to go to,..etc. If his faith is questionable, and he professes to be a man of God, red flag, he might just be lying to you, or is still in the baby stage. And you don't want a baby, you want a man.

5. He tries to control you.

Investigation: Does he try to tell you what to wear, does he want to follow you everywhere, he gets jealous easily, he doesn't want you to go certain places too often, you can't be yourself around him, does he choose the restaurants that y'all go to every time,  he's always right, he never asks  for your opinion, does he make you feel stupid, he thinks less about women, does he pressure you to do things, that you don't want to do, he doesn't want you talking to certain people, he gets angry when you 'disobey' him? Yep, he's a control freak. You don't need that in your life. Unless he's actually trying to help you be better, there is absolutely no reason a man should attempt to have you leashed like a dog.

Investigation: Has he held a job for over 2 years, did he graduate from high school, did he attend a trade school/college/university, does he own a bank account, does he save, does he have goals and plans to achieve them, is he superficial, is he materialistic, does he act like the world revolves around his ego, does he like to clean, does he cook for himself, does he drive, does he have his own apartment/house? And don't take his word for it, you need evidence. If he acts like a bum, he's a bum. And last time I checked, bums live on the street, not in your life.

7. He's afraid of being tested for an STD.

Investigation: Ask him to get to get tested with you? If he's sleeping around with multiple women, he might be hesitant to get tested. But he needs to agree to do this, because you do not want to marry a man with an STD, and not know that.

Don't settle for less than you deserve. Investigate your future husband, don't take his word for it. Get to know exactly what type of man he is, and will be as a future husband and potential father. Some men do not change for the better after marriage, so don't marry Mr. Wrong hoping he becomes Mr. Right. This can go horribly wrong. I hope this helps.