I Don't Know My Husband 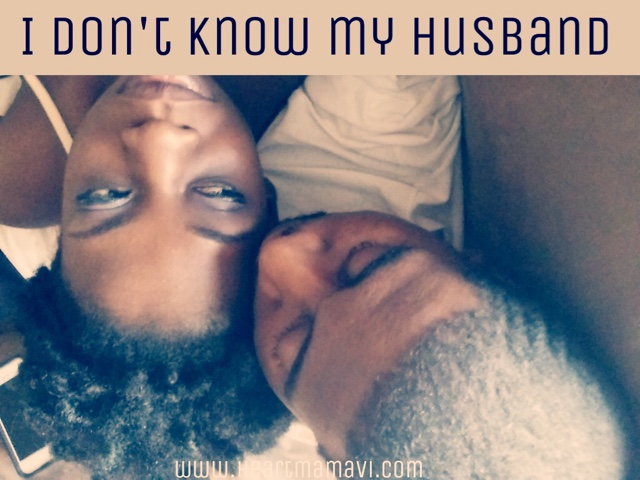 We've been together for almost 6 years, and I thought I knew him like I did the back of my hands. Then again I don't really know the back of my hands, because I hardly pay attention to it.  But you know what I mean. Anyways my sweet husband and I were sitting down in the living room, watching something that was so irrelevant, that I can't even remember the name of it. I have no idea what we were talking about, and maybe this is why he comes up with what I'm about to tell you. He looks at me and he says, "You don't know me."

"Say what! Come again," was my initial response. Did I really just hear my hubby-bubbly say that I don't know him. I looked him in the face and although he was smiling and shaking his head, like "I can't believe this," he said it again like he really meant. Like it was something that was on his chest that needed to get out.

At first I tried to laugh it off, but it then felt like a dagger to my heart. Here I was thinking that I was doing all I needed for my boo, only to receive an internal(not literal) slap in the face. Then he goes on to say...wait for it... " Why don't you blog about that."

Oh no he didn't. Gurl he sure did. So here I am blogging about it. He listed his reasons and it had me thinking,"Mehn, maybe he is right." So before some of you make the same mistakes that I did, I'm sharing this so that you won't, or continue to make these mistakes. Here are some ways to get to know your husband.

When you ask "How was your day", mean it. I usually ask him everyday how was his day, and he says the same thing everyday. "It was okay." And we move on to another topic. Apparently I don't mean it, hence the reason I asked it in the first place. Right? So what is a woman suppose to do, interrogate him? He said his day was okay right?
Apparently he felt that I could have gone more in depth and ask more questions about his day like I actually cared.  He believes that I'm asking like a robot, repetitious, routine, just to say I asked. And when I think about it, maybe he's right, just a little bit. Shame on me! But hey, at least I asked right. Don't make this same mistake, ask specific questions, and even if you get a one word response, ask another.

Remember his favorite things. So he decides to prove how much I don't know him. He asked, "What is my favorite color?" "Take the wheel Jesus",  how am I suppose to remember that? He almost never wears the color, let alone owns anything that's the color. Anyways y'all better know your hubby's favorite things, especially his favorite color, because that was embarrassing for me. Even if you think you know it ask again, who knows it might have changed over the years.

Ask him about current things he's working on.  For instance, if he's reading a book, genuinely ask him about it. If he's working out, ask how many pounds has he lost. If he travels a lot, ask about his experience and some of the interesting things he saw. If you can care less, no point in asking right. But do it because you care for him. You might get 'short and sweet' responses, but keep asking. He can't say you've never made the effort, right? Make it your business to find out what's going on with him.

Make conversations more about him sometimes.  Is it my fault he didn't  have much to say when I asked him a question, rather than a 'short and sweet' response all the time, give a lengthy one. Anywho I just felt that if you don't care to talk about yourself to me, I'll talk about what's going on with me. Is that bad? Well ladies hate to break it to you, but apparently saying in depth how your day was, since your hub did not want to return the favor is bad. Apparently you come across as a self centered queen, that the world revolves around. Boy that was mean. You have been warned. Make a few conversations about him, and zip it about yourself just for a few.

Well, that's all I got for now. If I happen to learn any more tips, I'll let you in on it. I appreciate my husband's honesty. Sometimes it's a bit on the blunt side and may sting a bit, but nevertheless he's speaking his mind. And what can I say, I love him for it.

This post was written to be slightly humorous with some sarcasm. But on a serious note, we can get so complacent in our lives, that we forget to continue getting to know our husbands(I know I did), like we did when we first met them. Don't make the same mistake I did.

I know there might be some women that truly don't know their husbands. You feel you're growing apart from them. Before walking away from the marriage, go to counseling, go on more dates, get to know each other again, try to make it work. Every marriage has it ups and downs, but we do what it takes in the name of love, and to keep our covenant.

Let's have a heart to heart in the comments below. "In two words describe your husband,  boyfriend, or dream husband (positively)."  Then share your thoughts on this subject.