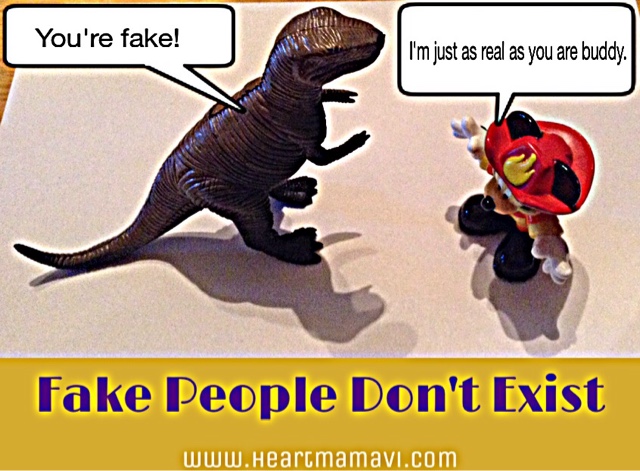 Here I was scrolling through social media every week, and every week I guarantee you someone's status has something to do with 'fake friends' or 'fake people'. It made me wonder, who were they talking to, the people that they accepted their friend request, or the ones that they intentionally made their information public to. Either way I felt like this needed to be addressed. I might even be called fake for saying so, but hey, that's just the way the world works.

Don't get me wrong, I use to be a firm believer in the existence of 'fake people', until one day the light bulb went on. Fake people don't exist, unless the person appears to be human, but has some sort of alien or none-human DNA, then yea, they're fake. But on a serious note, it's not just the literal aspect that I don't agree with, it's the concept on a whole. I did some digging and underlined some of the top characteristics that a 'fake person' has. I will then tell you the truth, and the why it doesn't make them fake at all. It's lengthy, but bare with me to truly understand.

Compliments too much or doesn't compliment at all.
Let's say you don't feel fabulous at all, and a stranger or someone you don't care much for, gives you a compliment. Oh boy, they're being fake, right?

Here's another example. You're wearing a new outfit. You look at yourself in the mirror, and you say "Girl, you look fabulous." You exit your house and no one, I mean no one, that you know gives you a compliment. So are they your real peeps, haters, or what? Because you would think if they were your 'real friends', they could at least give a sister a compliment, right?

The Truth: Just because someone gives you too many compliments, it doesn't make them fake at all. Maybe they really do like whatever it is they complimented, or they just want to make you feel good. If they're lying to you, then that's between them and God. Someone says something nice to you, say thank you. Stop worrying about whether it's genuine or not.
Also, just because your 'real people' don't give you a compliment, it does not mean they are fake. Everyone has their own things going on. The last thing that might be on someone's mind is the outfit you're wearing. Like really, the world does not revolve around you. Selfish much?
Yes, that was a little harsh, but it's the truth.

The Truth: First of, what is it to you? Like why do you care so much? It's their life. Whether or not they are pretending, that does not make them fake. It makes them human pretenders. No one wants people to see them hurting, depressed, poor, down and out, struggling...etc. Like really? No one wants to glorify how suck their life is. Who does that, do you?

The Truth: Don't pretend for one second that you have never in your entire life spoken badly about someone behind their backs. I know I have. Is it good? Nope. But are you fake for doing it? Nope. It's called being a human being. Of course you should be honest and tell someone in front their faces that they are being a complete idiot. But we don't always do that, now do we. Tell you why? Because we either care about that person's feelings, or we're afraid of their reaction.

The Truth: They are not fake, they are simply being jerks. Everyone has the ability to make you feel like crap, if they try hard enough. My husband is a jerk sometimes and I return the favor. Lol! Does that make us fake? Nope. It makes us human.

Appears to be someone they're not.
This person appears to be a sweetheart, but is truly evil underneath. Or vice versa

Isn't there when you need them.
This person you are always there for, and the moment you need them, they are gone with the wind.

The Truth: Of course there are some cases where some people always need you for something, and when you need them, they are non-existent. Those people aren't fake at all, they are called users. Users take, take, take, and the moment you open your hands to receive from them, they disappear.

There's also cases where you're not really there for them at all. And just maybe they can read you like a book. Or just maybe you are too needy. Or just maybe you do things to get things in return.
So they're fake, because they won't give in to all your needs, right? How often have you given into their needs? And if you did, why are you taking notes? You get my point right.

The Truth: So why are you still trying to reach out to them? Clearly they are not interested in maintaining a relationship with you, right? Maybe. Or they might just be busy, overwhelmed, or just don't feel like talking or responding to you. They could careless about how you feel about it. Just because someone doesn't take one minute out of their entire day to send you a text or call you, it doesn't mean they don't care about you. They're just doing their own thing, and you need to do the same.

If you truly want to reach out to this person, do so. But don't do so with the hopes that they will automatically start reaching out to you. Expect the best, prepare for the worst. That's just how life works.

Also, not everyone is as social as you are. Yes they might come to your events, if you invite them. But that does not mean they have events. If they're like me, they probably don't have events. Maybe they have a husband that's not into those kinda stuff(speaking about myself here). So don't get your panty/brief tied up in a bunch about it. Just ask the person.

Tries to please everyone.
This person is a social butterfly. They get along with everyone and can relate to anything. I mean they did it all, and know it all. He/she is a people pleaser and a very good one.

The Truth: You and I both know that you can't please everyone. So as much as this person appears to be pleasing everyone. They're not. But why are you so bothered about them being an entertainer? Yes, that's not your cup of tea. But to each it's own.  Maybe this person genuinely gets along with anyone, and have a lot of experience with things. So! That's them. What is it to you? They're not being fake, they're being them. Whether or not they are pretending, that's not your concern. That's theirs. Let their conscience bother them, not yours.

Tells a lot of lies.
This person is always lying. Like every word out of their mouth is literally unbelievable.

Before you attempt to throw stones and call people 'fake' evaluate yourself. Because chances are you have done, or are doing all the things you consider 'fake people' to be doing. It does not make you fake at all. It makes you a person. And people will be people.

We will sin, we will do/say bad things, and that's not being fake at all, that's being a spiritual being in a fleshly body. The struggle to do the right thing is real. So when people don't always do the right thing or do the things that we expect them to do,  it doesn't make them fake. It makes them human, and it makes you selfish and/or unrealistic. Because who are you to call someone 'fake', when you do the same exact things that they do. I'm just saying.

I know that I am coming across a little harsh, but this is me speaking from my heart. I'm speaking to myself too. This is tough love, but it's the truth.

If someone has wronged you, that's life. Forgive them and move on. Because chances are this will happen several more times in your lifetime.

If you have wronged someone, acknowledge it, apologize, repent, and try your outmost best to not repeat. Let your conscience be your guide.

This New Year recognize people for who they are and don't label them as 'fake'. That's just life, and people will be people. We still shower them with love, and try to  be a better person. Be safe and have a blessed New Year!

Let's have a heart to heart in the comments below. What are your thoughts?